iTerm2 is a very powerful piece of software and includes a plugin system that allows you to write Python scripts that terminal programs can take advantage of. In this post, we're going to write two Python scripts for iTerm2: one to automatically switch to/from Dark Mode, and the second to play a sound on your local speakers when an escape sequence is printed, even over SSH. I'll also share a few bonus snippets that take advantage of some of iTerm2's lesser known features.

Once enabled, go to "Scripts ► Manage ► New Python Script". If you've never done this before, iTerm2 will automatically ask to download the Python runtime. Once that's downloaded, answer "Basic" and "Simple" to the two questions, then save the file to the default directory (~/Library/Application Support/iTerm2/Scripts). Take the template that iTerm2 created for you and add a print statement to it after the async_create_tab call.

Now in iTerm, select your script from the Scripts menu. If everything is working, your active window should open up a new tab.

Debugging these scripts is possible with the iTerm2 console. To open it, use "Scripts ► Manage ► Console". You'll see all of your scripts, including those which have crashed or finished. Clicking on the latest one, we should see the output from the script, including the "Created a tab!" message that we added. We can also use the "Terminate" and "Restart" buttons to control the script. Note that you'll need to manually restart the script any time you make a change to it. 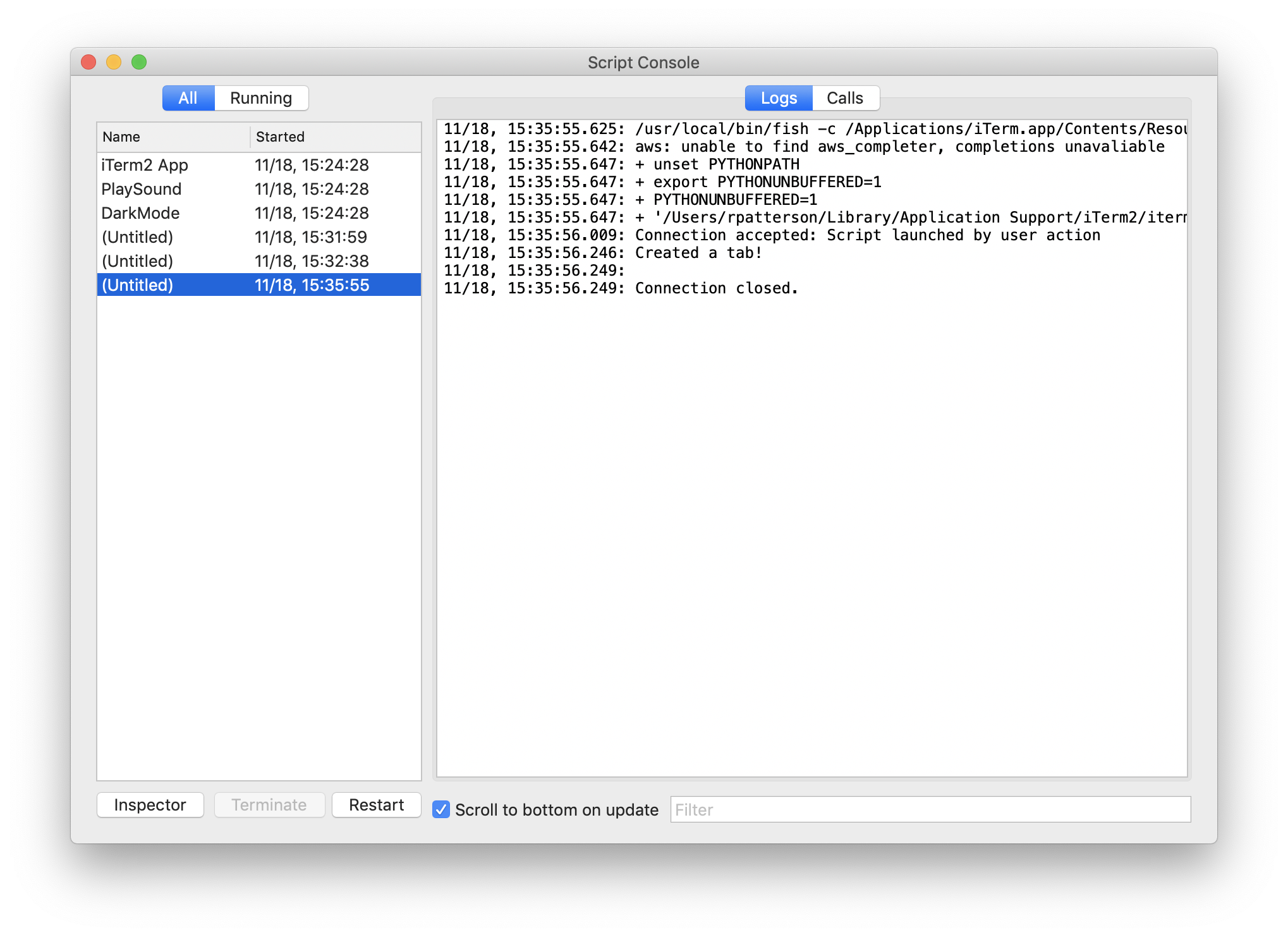 Once everything is ready, we could move our script to the Scripts/AutoLaunch directory to have it be started automatically by iTerm2 when iTerm2 launches. That isn't useful for the one-off script from this example, but you will probably want to do this for long-running scripts like the next two. 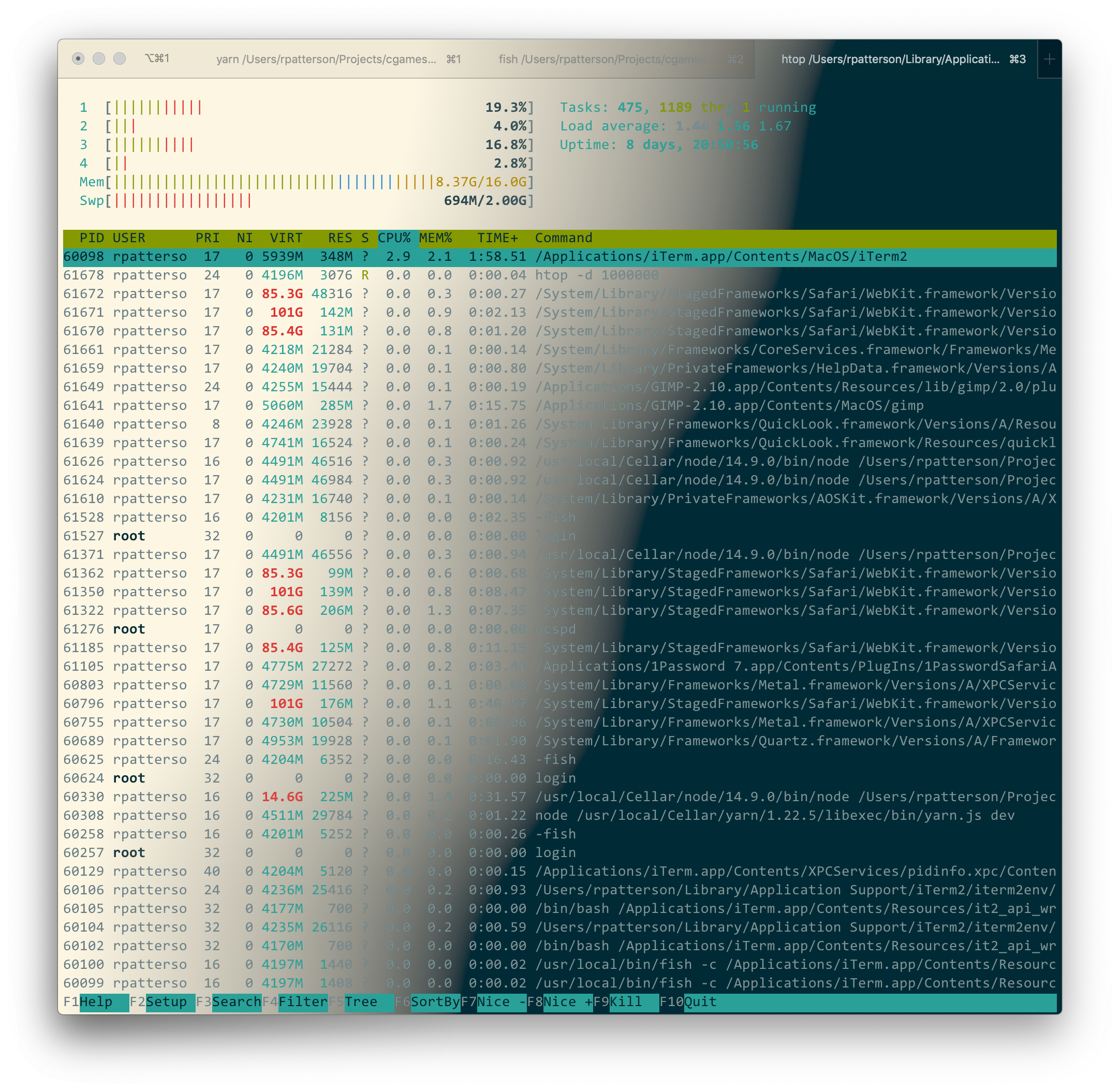 To have iTerm2 automatically switch between a light and a dark theme following your system setting, follow these steps:

I'll walk you through the important parts of the code. Starting in the main function, you can see we set up a VariableMonitor on the effectiveTheme variable. This will allow us to detect when the system toggles Dark Mode. Note that the main function also checks the theme once on startup, so if Dark Mode was toggled while iTerm was not running, the change will be picked up immediately.

The async_handle_theme function simply looks at the theme, which will be something like "dark", "light highContrast", "dark minimal", etc., and decides which color scheme to use before passing it to async_set_color_preset.

The main workhorse is the async_set_color_preset function. The first part loops over all of the saved profiles in iTerm2, which are called PartialProfiles. You can see in my screenshot above that I have just one named "Default". By setting the color scheme for each profile, when a new session is opened it will have the correct color scheme applied.

The second part loops over all tabs of all windows and sets their color scheme. This is causes all of the current session to switch to the correct color scheme when the system switches to/from Dark Mode. It does this by creating a LocalWriteOnlyProfile which will just contain the necessary changes to the colors, and then applying those changes with async_set_profile_properties.

Once you've set up the color schemes and installed this script, it'll work silently. If anything isn't working, check the iTerm2 script console first to find out why.

This script allows you to write a short shell script to play an audio file on your local computer (or anything else, even to hit a physical bell), even over an SSH session. It works by using iTerm2's custom escape sequences to run a Python function. To install this script:

Our new custom escape sequence can be triggered using this bash snippet:

You can replace the "Glass" with the name of any sound file in one of the LIBRARIES directories. If you have a MacOS machine, the above snippet should make this sound:

The source code to this is really simple. Let's first look at the main function: it uses a CustomControlSequenceMonitor to listen for our sequence, and then it calls our locate_sound function to resolve the value (e.g. Glass) to a filename (/System/Library/Sounds/Glass.aiff), and finally calls a program to play the sound.

Our locate_sound function simply searches for files with a matching filename in one of the configured directories.

A quick note about security here. The iTerm docs recommend that the ID (COMMAND in this script) should be a password rather than a well-known string. This is because knowing the ID is the only access control that the file has. For example, if you run curl malicious.site/textfile and that file contains the escape sequence, it would trigger your script. For something silly like playing sounds, this isn't a big concern, but it's certainly worth keeping in mind when expanding on this idea.

This next section doesn't require any Python scripts at all: everything is built into iTerm2. iTerm2 includes many proprietary escape codes that we can take advantage of using some simple shell scripts. You can add these scripts to your .bash_profile to use them interactively, or include them in scripts you write.

The iterm_notify function sends a system notification with the provided text.

The iterm_bounce function causes the Dock icon for iTerm2 to, well, bounce.

Finally, the iterm_badge function adds a text label to the background of your terminal. This is useful for labeling tabs when you have many of them open. 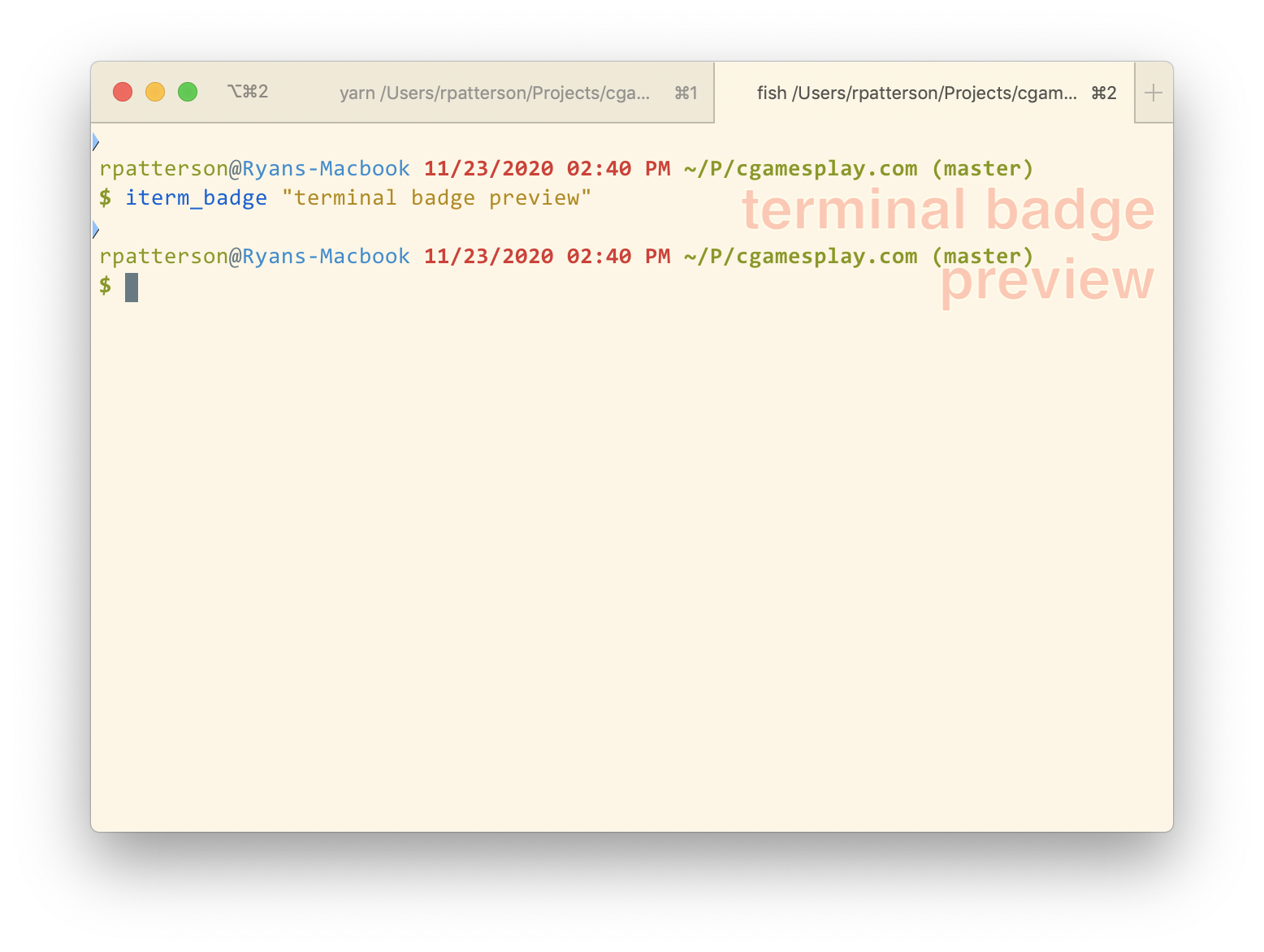 With these scripts you can make iTerm2 more useful for you. Next time, we're going to look at some ways to get the most use out of these scripts.

Hi, I’m Ryan. I’ve been a full-stack developer for over 15 years and work on every part of the modern tech stack. Whenever I encounter something interesting in my jobs, I write about it here. Thanks for reading this post, I hope you enjoyed it!
© 2020 Ryan Patterson. Subscribe via RSS.